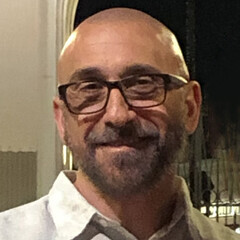 Professional Summary
Joe DiCesare has been actively working as an artist in the feature film and television industry for more than twenty years. A graduate of Pratt Institute, Joe began his art career as a paperback illustrator, creating artwork for over 200 book covers in the romance and young adult genres for major publishing houses in New York City. In 1998, he relocated to California to begin his career as a visual effects artist at Industrial Light & Magic, working on Star Wars Episode I, and at PDI/DreamWorks, working on the original Shrek. He quickly concentrated his work on matte painting and concept art, combining his expertise in 2D/3D computer graphics, with his highly developed painting skills to create photo-realistic and unique images.

A member of the Visual Effects Society, Joe has worked on motion pictures, as well as television series, video games and advertising, for major studios in Los Angeles, New York and internationally. His work has twice received recognition from the Society of Illustrators, New York, NY.